Are you one of those who are searching for an economical and high-end video conferencing solution? Then Logitech Group Video Conferencing System got you covered.

The Logitech Group is considered an all-in-one package, which covers everything you need. It is composed of a large 1080p camera along with with motorized tilt and pan and ten times optical zoom. It also features a big speakerphone base station, along with a powered central hub and an internal omnidirectional mic to connect them all.

This is a high-powered video conferencing system, which makes installing teleconference for big and medium meeting rooms as simple as plugging in cables. It comes along with a High Definition camera along with the Zeiss lens. You see, the camera employs a smooth motor to zoom, tilt and pan, offering you ten times lossless zooms, 130 degrees tiling angle and 260 degrees panning range. It generates a 1080p full HD video at 30 fps.

The good thing about the Logitech Group is that the system comes with a speakerphone with 4 omnidirectional microphones. It will offer you a 360 degrees coverage up to twenty feet. What’s more, the speakerphone is NFC and Bluetooth enabled for a perfect pairing.

A full-duplex speakerphone is also accessible, and it has a complete range of audio boosts, such as acoustic noise cancellation. It provides a hub, which connects each of the parts and allows you to include expansion microphones. Moreover, include are dual placement and wireless remote mount for wall mounting or lifting the camera when it is set on the table. 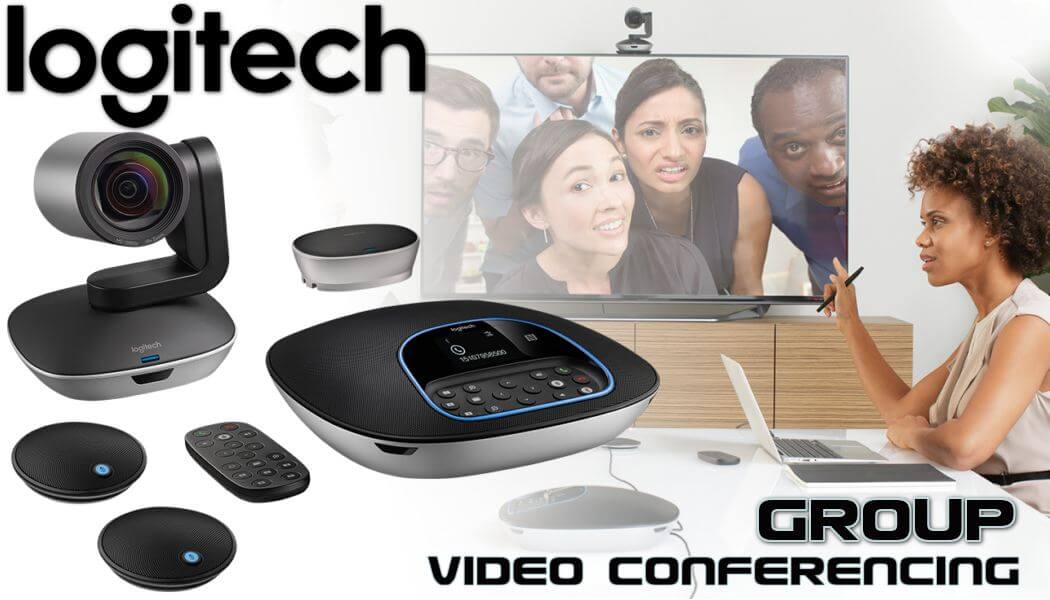 What is in the Logitech Group Kit?

Logitech Group is right at home in large meeting rooms, housing up to fourteen participants. Its speakerphone and camera each have 5 millimeters mini-DIN cables, the power supply has a three millimeters cable, and the supplied USB cable is two millimeters long. Logitech Group’s range can be stretched yet further with two added microphone stations. That can connect straight to the speakerphone base.

The Logitech Group enhances the company’s previous ConferenceCam cc300e unit. That’s because its speakerphone is of much solid metal construction that lowers vibration. It also doubles the number of internal microphones to four. What’s more, the touch panel has been changed with a collection of rubberized buttons for setting the volume and controlling calls, camera position, zoom, and Bluetooth pairing.

Logitech Group’s speakerphone has 3 buttons for moving the camera quicker to zoom locations and preset locations. On the other hand, the included remote control handset provides five, so you can change focus quality between various areas of the room or speakers during a meeting. The presets are simple to program as well. It is straightforward to set your view and hold down one of the preset controls until the speakerphone peeps.

Talking about the Bluetooth, the speakerphone supports NFC, which makes it a breeze to pair your mobile phone with it. The Bluetooth pairing is initiated by pressing down the control button until the blue LED status shoe surrounding the button of the speakerphone and recess flashes blue.

If you have a Microsoft Lumia 640 Windows Phone, you can rest assured that it will work and be paired flawlessly. What about the iPad? You don’t need to worry because the audio output quality can be both loud and clear enough to fill a spacious meeting room.

Do you think about physical deployment? Fret not, because the two small DIN cables, which connect the speakerphone and camera to the central hub, are color coded. Thus, it is clear what goes where.

When we talk about the installation on a Windows 10 desktop, it was a breeze as well. Keep in mind that the Logitech Group is a UVC-compliant. Therefore, all the needed drivers are built in into the operating system. You can also utilize the own tools of the windows for running some diagnostics and changing camera settings. Logitech Group also offers a Skype plugin to allow the Call End and Call Accept buttons on the base unit as well as remote.

Everything will work flawlessly. Skype can pick up the camera instantly after it has been installed, and video calls will work without problems. The End and Accept buttons of the remote will work great as well. GoToMeeting was just as easy to use. The software will spot the camera automatically and will provide you with a range of controls for it. Also, there’s an option of picture formats like a 16:9 widescreen option.

One strength of Logitech Group is its video quality. Your meeting feed will undoubtedly appear in a clear focus, with good color and contrast balance. It all adds up to a complete and classy videoconferencing setup, at a little the price of a standard enterprise solution. It’s simple to use and very multipurpose, along with superb audio and video quality to offer your meetings that professional touch you always crave.